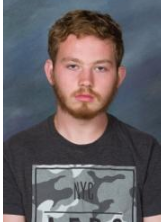 From the tropical coast of Clearwater, Florida to the winter-wonderland of Madison, South Dakota, Jacob Seppala, son of Crystal Aldana, grew up as the second child in his family.  The responsibility of being the older brother falls on him now -  he has 3 younger brothers: Nicholas, Charles, and Maximus; 1 younger sister, Sophia; and an older brother, Thomas. The last year of his life, when compared to food, is a potato with legs - “It was bland but always moved.”

As a kid, Jacob was always the quiet one. He spends the majority of his time reading or watching television. He loves to watch Pirates of the Caribbean and Indiana Jones. If he could live anywhere in the world he would choose Hawaii - “It would be awesome to live in Hawaii". He says, “I imagine being there with the cool tropical breeze coming off the nearby ocean.”  If given the opportunity, he would visit the Neuschwanstein Castle in Germany and he recommends people should visit this place too if into medieval history.

Ten years from now he sees himself as a well-known car fanatic, owning multiple cars ranging from a 1972 Honda Civic to a 2019 Bugatti La Voiture Noire. He has always been fascinated by old cars and has always dreamed of owning a 1958 Chevrolet Corvette. If given the opportunity to have 5 million dollars he would spend it on a house with a 5-car garage to fit a 57’ Chevrolet Bel Air, a 57’ Volkswagen Beetle, and 3 Corvettes. As for plans for after high school, he is unsure what he wants to do. He says, “I'm not worried about what happens after high school; I’ll just ‘go with the flow.’”