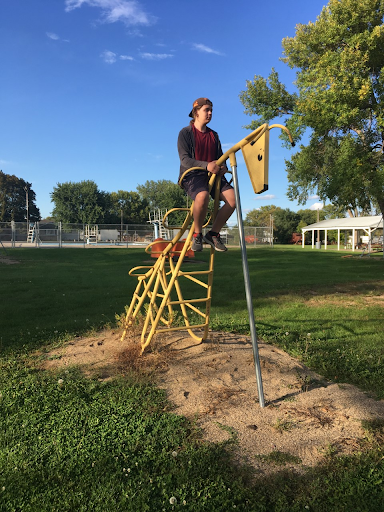 Braxton Alton Gulbranson is a wild individual. Braxton was brought into this world on April 14th, 2004. Oddly, this date is found in Ubisoft’s hit game Rainbow Six: Siege on several calendars. Despite the connection, he rarely plays video games. In its stead, Braxton scoots around town in an automobile

Automobiles are a big part of Braxton’s life. He currently drives a clapped-out 2004 Ford Ranger with a 4.0 V6. I say “clapped out” because of the truck’s tendency to be borderline “Pull-Me-Over” loud. You can see, and hear, Braxton around and in the Madison area. Another vehicle that Braxton is known for is the late 1998 VW Beetle. The vehicle was a pimp-mobile to the very end.

If Braxton could buy anything, he would buy the state of Iowa.

If Braxton could have a superpower, It would be the ability to have fully functioning finger guns. He would want this just because of the comedic effect and the slight usefulness of said finger guns.

Braxton's favorite stuff, at the time of the interview, goes like the following. His favorite color is blue; favorite animal is a cheetah; dinosaur,  a stegosaurus; his drink - lemonade, and finally, his pen of choice is a Precise V5 RT by Pilot.

After graduation, Braxton plans on going to Colorado to chill. To Braxton, Colorado is aesthetically pleasing and the mountains offer plenty to do.