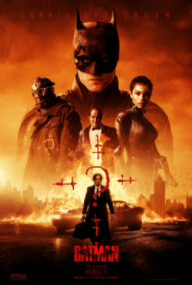 A Movie Review - The Batman

One of the most anticipated films of the year has finally come to theaters, and it is safe to say that it has lived up to the hype. The Batman has officially released and fans of this franchise have had only positive things to say about this film. The hype behind this film has been shadowed by a multitude of problems around the world, but this didn’t stop the movie from doing extremely well.

The Batman has grossed over $1.88 billion worldwide. With theaters just recently opening back up, this number is extremely impressive. One negative that viewers may speak about is the fact that the movie has a runtime of roughly 3 hours. For a majority of the film, the movie is action-packed and does a great job at keeping the viewer entertained. On the other hand, the movie tends to feel like it is being dragged out towards the end of the film. Instead of a 3-hour movie, I believe this could have been slimmed down to roughly 2 and a half hours.

Another positive aspect of this movie is that this film doesn’t rely heavily on specific lore that most viewers won’t be familiar with. This is a huge positive because that means that viewers are able to watch this movie without having to do any research beforehand. Although I will say that it is a lot more enjoyable to watch if the viewer has a decent understanding of the main character, Batman, and the main antagonist, The Riddler. Overall, this film rivals some of the best superhero movies of all time and is worth the watch.