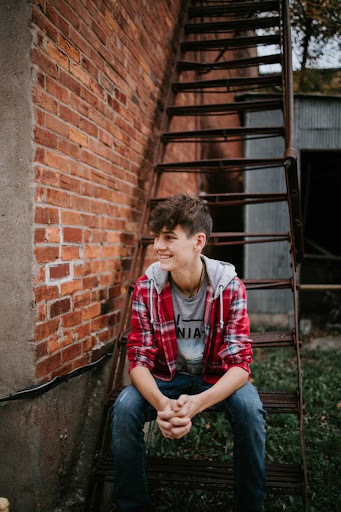 Myles DeVaney is 17 years old and he has two sisters. His full name is Myles Tyler DeVaney. He lives in Madison with his mom, dad, and his two sisters. If he could live anywhere in the world for a year, he would live anywhere in the South because he hates the cold. If there is an animal that best describes him it would be a “sloth because I’m lazy.” Myles’s favorite movie is Jaws; it always had been since he was a little kid. If he had a superpower he would choose teleportation because he doesn’t like to travel so all he had to do is think about a place and teleport to that place.

When you ask Myles what comes easy to him, it’s school. The one food item from last year that describes his life is corn because he's grown a lot. After school, Myles works at Pizza Ranch. After work Myles gets to eat and go home, which he says is the most rewarding part of his job. Myles says that he recommends underclassmen “to get into as many sports and activities as you can throughout high school.” On the weekends plays soccer and hangs out with his friends.

If you ask Myles what he would buy if he had 5 million dollars, he would say he would buy cars, a house, and items for the house. If he could play any character from a movie he would be Spiderman because “Spiderman is the best superhero there is and I've always liked him since I was a little kid.” I asked Myles if he had a YouTube channel what would his content be, it would be with his friends sitting at a table doing a broadcast talking about random topics. After graduation, Myles plans on going to college in Rapid City.  10 years from now, Myles sees himself living in a big house with a family and working with the weather in some way, shape, or form.